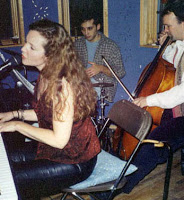 I am preparing to be on the road for about a month as I travel to the Mainland to record my new music. I will be departing in a few short days for California, and then on to New Mexico.

My plan is to document the recording process through a series of video posts (vlogs). My producer, Larry Mitchell, is the one who recommended that I do this. Seems like an awful lot of tech stuff to think about while I’m in the “heart zone” for singing/playing my music, but I’m certainly up for trying. Between the two of us I’m sure we’ll manage something.

I’m also continuing to ask for all of the resources that I need to complete this project, i.e. actually demonstrating the creation and manifestation techniques that I have written about on my blogs. This is perhaps the furthest I have “stuck my neck out” ever… trusting in and applying what I have been shown and given in visions and ecstatic states. I don’t have a “day job”. I decided awhile back that my only job was to be who I am, and that I would be provided for by Grace. Indeed I have been blessed. I guess you could say that I’m doing my part in “breaking the spell” that keeps humanity feeling stuck and limited in the world as we have known it. I believe in… wait. I know that it is possible to be fully alive and fully supported for being who I am in this world. I have demonstrated these principles in the past; therefore, I know that it IS happening.

After the recordings are complete, my work is to travel and sing-speak-demonstrate the feminine healing frequency to any who are drawn to the sound of empowerment and inspiration. My working title for the project is, “Kundalini Chronicles”, as all of this music is born from what I know to be our natural ecstatic state – not from the Eastern perspective, but rather from a Western girl who experienced it first and then found out later what “IT” was called. After two previous CDs, mostly filled with a spiritual longing for the return of what I had been touched by, my 3rd CD is from the view of being, embracing, and celebrating both my humanity and Divinity – woven into a dialog that succeeds in bridging and resolving this inner masculine/feminine split.

In my recent incarnation as a performing singer-songwriter I was too afraid to break out of the mold of what was expected of me within that role. I am no longer confined by that role now. I am a mystic and a musical artist in real time. I do not “perform”; I create and sing music from the heart, in the present moment. I feel that as long as I am on Earth I will do this. And whether I have an audience or not, I choose to be and sing, Love.

To be continued in February, from Santa Fe, New Mexico…

P.S… My story (short version) was published in Kindred Spirit Magazine (Jan/Feb ’07). It’s entitled, “The Divine Feminine: A Cosmic Love Affair”. Interesting to note though, I have rarely referred to it as “Kundalini”. I’m not very big on existing labels. I prefer to find other more ‘feeling’ ways to describe my experiences so that the intellect cannot quickly grab onto a familiar word and throw it into a box.

8 thoughts on “By the Grace of God(dess)”

This site uses Akismet to reduce spam. Learn how your comment data is processed.