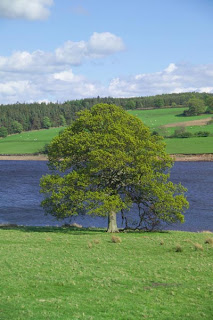 The vision this morning started with the imagery of a little “teaching” story. It then unraveled into a rhymie-style children’s poem. I have to say that I very much relate to this tree, having lived her story in my own life. I wished there would have been someone to tell me… I mean, it could’ve saved me a lot of time and energy if I’d have been informed of this simple wisdom earlier on in my life. I imagine if we sat under a tree like this one, honored her and listened very carefully, we might be fortunate enough to hear and feel the profound guiding messages of the Natural World. Still, regardless of whether she has been heard or not, she keeps broadcasting until we are tuned in enough to receive the messages; the messages that no matter what any “important person” says, we too are natural, and one with Source.

Once upon a time there was a mighty oak tree.
She lived in a beautiful green meadow,
And was so very happy…
Just being a tree.
Until one day an important man from the city
Stopped by her trunk and said,
“It isn’t enough to just be a tree.
You must be more productive and
Contribute to society!”
The tree became very sad.
She already felt that she was being
And contributing so much to the world
Just by being a tree!
She dropped oodles of seeds
As food and treats for many.
She offered her branches and leaves
As refuge for the birds,
The animals and the honey bees.
One day she became so dismayed
By what the important man said,
That she uprooted herself
And headed straight for the city.
Now it isn’t easy for a tree to disguise herself
As a productive citizen on the busy streets,
But over time she managed to fall in line.
And it was very hard work to be
Something other than a tree,
So eventually it took its toll and it was plain to see,
That her branches and leaves were withering.
She learned many things from her time in the city,
Mostly that it was an impossibility
To pretend that uprooted trees
Don’t get tired and confused…
Not to mention very thirsty.
So even though she barely had the energy,
She managed to find her way back
To the beautiful green meadow
Where she was born from a tiny acorn seed.
Sinking her roots back into the cool,
Inviting earth,
The only thing she did for quite awhile
Was smile and sigh and breathe.
All of the animals,
The insects,
The soil
The water
The wind
And the sun,
Welcomed
Her home again.
“Thank goodness,” she beamed,
“That I remembered in time;
Whether you live in the meadow,
Or ‘productive society’,
A tree is most happy…
Just being a tree.”

11 thoughts on “Just Being a Tree”

This site uses Akismet to reduce spam. Learn how your comment data is processed.